Too early to say economy bottomed out: Sitharaman - 16th November 2019 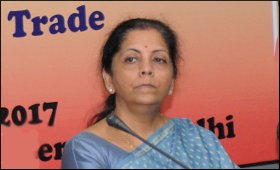 Finance Minister Nirmala Sitharaman on Friday said it was too early to say if the slowdown in the economy had bottomed out but she hopes the growth in second half of the fiscal will be better.

The Minister also said companies are planning new investments as a response to corporate tax cuts announced in September.

Asked if she expected the growth to be better in the second half, she said: "I may not be able to predict about it, but I am hopeful that it will be better."

The GDP growth for Q2 is expected towards the end of this month and a recent SBI report said it could be at 4.2 per cent -- lower than the current 5 per cent of Q1.

At a media interaction here on Friday, Sitharaman said that actual investments may take some time to materialise but there are considerations by corporates.

"Actual investments may take some time to materialise. Three cities with four projects have been identified for relief under Real Estate Fund," she said.

On the liquidity extensions to the NBFCs, she said PSU banks have given funds to the AAA-rated NBFCs but AA-rated NBFCs have met her on their funds issues.

"I have sought details from RBI and PSU Banks on funds given to investment grade NBFCs (which are not AAA) and top 50 NBGCs were engaged with banks for disbursal of funds. Government has launched several steps since August to revive economic growth from the weakest pace..."

The Finance Minister also said no welfare schemes will be curtailed despite low revenues and she expected GST numbers for November to be "good".

She said that the government has no plans to cut spending on welfare schemes and will encourage all the departments of the Union government to spend entire funds provided in the Budget.

The minister said she expected November GST collection to be "good". GST revenues stood at Rs 95,380 crore in October.

"Welfare schemes will be there. I have started doing the Budget exercise. On fiscal deficit or position I will be able to talk when Revised Estimates are complete. I will do nothing... not disturb the welfare schemes," she said.

The government has high expenditures on such welfare schemes which are aimed at poorer sections and agriculture -- the MNREGS, PM Kisan Samman, and others.

The government has so far mopped up Rs 6 trillion or less than 50 per cent of the total tax collection target of Rs 13.35 trillion for the current fiscal and efforts are being made to achieve the target set in the Budget, Central Board of Direct Taxes Chairman P.C. Mody said on Thursday.