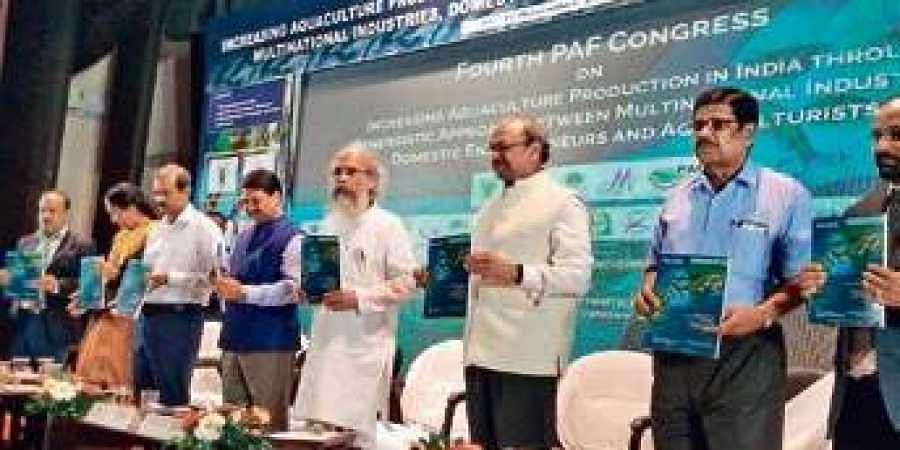 BHUBANESWAR: In order to achieve the goal of USD 5 trillion economy and double farmers’ income by 2022, focus needs be shifted to aquaculture that has immense potential to provide adequate employment and generate more revenue, opined Union Minister of State for Animal Husbandry, Dairying, Fisheries and MSME Pratap Chandra Sarangi.

Inaugurating the 4th Pillay Aquaculture Foundation (PAF) Congress on ‘Increasing Aquaculture Production in India’ at Central Institute of Fresh Water Aquaculture (CIFA) here on Friday, Sarangi said aquaculture can meet the nutrition requirement of thousands of poor at a minimal cost and save them from malnutrition.

“Pollution and climate change are major threats for aquaculture sector. Awareness among people is the key to stop use of plastics and keep water bodies safe and pollution-free, so that quality products can be produced for our consumption and trade,” he observed.

The Minister urged for concerted efforts in making aquaculture profitable by strengthening value chain. Scientists and planners should bring knowledge and innovation to common farmers and technology should be used to sustain the ecosystem besides the judicious use of chemicals and fertilizers, he added.

The three-day PAF Congress organised to pay tribute to TVR Pillay, considered as father of modern aquaculture, has brought together various stakeholders to deliberate on synergising efforts of national and international agencies for development of the sector.

OUAT Vice-Chancellor P K Agrawal called for enabling policy support to farmers. He hoped that fisheries education and research in Odisha would get a boost from the newly formed Fisheries Ministry at the Centre.

The Minister felicitated 10 innovative farmers/entrepreneurs for their exemplary accomplishment in aquaculture. Two mobile apps IndAqua and TreatmyFish, developed in Odia, Hindi and English were released on this occasion.