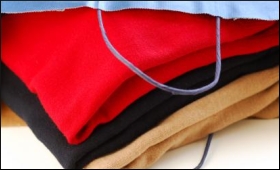 Apparel Export Promotion Council (APEC) on Thursday identified 10 major products which, according to the body, India can export and fill up the supply gap vacated by the coronavirus-hit China.

An AEPC statement said that that the top 10 Chinese products exported to the US where India also has a presence include jerseys, pullovers, cardigans, waistcoats made of cotton or man-made fibres (MMF), trousers, shorts made of cotton or synthetic fibres, hosiery, T-shirts, singlets and tracksuits.

The development comes a day after Union Minister for Textiles Smriti Irani called on textile exporters to move into spaces vacated by China. Irani also said that the government will identify ambitious MSMEs who meet export compliances and delivery schedules, and support them with finance, legislation, certification, quality control programmes and research and development (R&D) to help them grow big.

AEPC Chairman A. Sakthivel said: "Of the $2.4 billion apparel market vacated by China in the US, India has captured a mere $237 million, or less than 10 per cent. However, the 'revealed comparative advantage' shows India has a good potential in seven of the 10 product lines."

The council has similarly identified top 10 Chinese apparel exports to European Union, Japan and South Korea, and highlighted the product lines where India has the potential to make a mark. Sudhir Sekhri, Chairman, Export Promotion Committee, AEPC, said: "Of the 36 per cent space vacated by China, only 5 per cent has come our way. While there are huge emerging opportunities, there is a need for introspection as to what needs to be done."

Further, the statement said that AEPC plans to identify the top 20 buyers of the identified product lines and request the government's support in engaging the embassies.

Sakthivel said: "While there is no problem with the US market, we will need the support of the textile and commerce ministries to gain access to some of the countries. In the US, the deciding factors will be sheer competitiveness and appetite of the Indian players, while in UK and EU early FTAs (free trade agreements) will help."